In 2022, Jytte’s focus was on sustainability and the environment, themes that have been discussed on the blog over the year. The first post of the Fall semester dealt with Jytte’s spring 2022 questionnaire on improving the sustainability of the university. This post, the last one of the year, discusses the statement inspired by the survey and the exchange between Jytte’s Climate and Environment Working Group and the campus cafeterias. The post was originally published in Jytte’s Winter Bulletin 2/2022.

In May 2022, Jytte sent out a questionnaire about improving the sustainability of the university. The responses highlighted issues around eating on campus, so the Climate and Environment Working Group joined Jytte’s board to draft a statement on vegetarian and vegan food options. The aim was to enhance the dialogue between Jytte and the cafeterias.

On Friday 11 November 2022, the statement was sent to the JYU campus cafeterias Semma, Ilokivi, and Compass Group. Additionally, it was sent to the chair of Semma’s board, JYU’s Director of Development Jarkko Pirkkalainen and JYU’s sustainability and responsibility specialist Ulla Helimo.

Below is the statement in full:

In Spring 2022, Jytte carried out a survey on improving the sustainability of the university. We received 64 responses, which means that roughly 8% of the members were interested in climate and the environment.

Nearly all the respondents (50) chose to answer the question, “Tell us what sort of vegetarian or vegan options you would like the university to offer?” Although some of the respondents noted that the quality and variety of vegetarian food and the salad options have improved, they generally wanted more improvements. Most of the comments mentioned the taste, the quality, and the range of options, all of which were found lacking.

Based on the results of the survey, the number and quality of vegetarian and vegan meal options must be increased in the university campus cafeterias. Jytte would like to see the following:

People also hoped that vegetarian meals were cheaper than meals including meat. Also, the more expensive à la carte meals could sometimes include vegetarian or vegan options. Catering should also have high quality vegetarian and vegan options on offer.

Several comments emphasised that meat and fish options should be retained, which may mean that people are afraid any investment in vegetarian meals would lead to a ban on meat-based dishes. It should be noted that JYU.Wisdom, for example, recommends a planetary diet in which vegetables and vegetable proteins form the core, but the diet still includes meat and fish (Wisdom Letters 2/2019). This type of diet and the developments related to it would also support the aim of making. JYU campuses carbon neutral by 2030 (Wisdom Letters 2/2021).

In Jyväskylä 10.11.2022
The Board of Jytte
Jytte’s Climate and Environment Working Group

In the email to the cafeterias, we expressed our hope for constructive dialogue. We made it clear that Jytte is happy to collaborate with them on any issues and that we would like to hear what sort of ideas the statement provoked in the recipients and what kind of actions they feel could be or have perhaps already been taken.

We were delighted that Semma, Ilokivi, Ulla Helimo, and Jarkko Pirkkalainen responded almost immediately. Later, we also received a response from Compass Group which runs the restaurant and the cafeteria in the University Library Lähde.

Jarmo Sallinen, the CEO, also said that Semma cooperates with JYU.Wisdom and a master’s thesis has been written on Semma’s carbon footprint and the ways to reduce it. Overall, Semma is happy to work with Jytte to develop things. Sallinen also said that responsibility is going to be one of Semma’s key performance indicators with a roadmap to responsibility on the agenda for 2023.

Representatives of the Climate and Environment Working Group met people from Semma on 7 December 2022. The conversation brought to the fore several actions Semma has already taken as well as some challenges and their thoughts on them. We agreed that that to get people to adopt a plant-based diet, they need to get positive experiences of vegetarian and vegan meals and not feel that what they are used to has been made “worse”. It was also noted that successful communication plays an important role in both the supply and demand of vegetarian and vegan food.

Ilokivi noted that they have done a lot around vegetarian and vegan meal options. For example, a vegan main has been on the daily menu since 2000 and all the catering ordered by the student union (JYY) is already vegan. JYY owns Ilokivi, which means that their meals are already affected by JYY’s carbon footprint goals, including the JYY Roadmap to Climate Sustainability. The aims are obviously high: Restaurant Manager Kati Lemiläinen told us that the goal is for the vegetarian main to be the most popular option by 2025. One big change has already taken place: since November 2022, Ilokivi has no longer had beef on the menu.

Compass Group responded briefly, noting that the cafeteria Tiede in the main library building offers a vegetarian meal option and Taide has the vegan option as the first item on the lunch buffet.

Are the actions visible?

In addition to actions taken, both Semma and Ilokivi also told us about the difficulties in placing vegetarian and vegan meals in the buffet as well as issues around pricing, seasoning, and avoiding allergens. Several things have been tried, but not always successfully. For example, Ilokivi tried replacing rice with barley, but the demand was significantly lower, which lead into an increase in wastage. Compass Group told us that they had received requests to reduce the so-called FODMAP carbohydrates in vegetarian meals. However, eliminating pulses from the menu would diminish the range of foods they are able to offer.

Both Ilokivi and Semma have also done things that might not always be obvious to their customers. Ilokivi noted that not all decisions affect just the main course, which is what the customers tend to focus on: for example, a main light on protein is meant to be complemented with protein-rich sides, but customers might not see it like that. Compass Group also stressed that Kela’s recommendation is for a student meal to contain at least 20g of protein, but that covers the entire meal, not just the main.

Semma operates a range of cafeterias, and the idea is that the meals at different sites complement each other: if one place has no vegan option that day, a nearby one will. Likewise, if the vegetarian options in one cafeteria are not to one’s liking, a nearby one will have something else on offer. Nevertheless, people may not remember to check what is on the menu in places they do not frequent, or it may feel like the place is too far away, in which case they may end up eating a meat-based meal in a place they find more accessible. Also, while people eating alone may freely choose where to go, many of us eat with friends and colleagues and in such situations the wishes of the only vegan in the group easily get overlooked. Having a wider range of vegetarian and vegan options in every cafeteria would make it easier for every customer to always get to choose a food they like. It would also be important for the principles guiding vegetarian and vegan meals to be obvious to the customers and that all the menus were clearly listed online.

Jytte will continue to influence the campus food options in 2023 – join us!

We also received a response from JYU’s sustainability and responsibility specialist Ulla Helimo. She said that JYU can promote the increase of vegetarian and vegan meals by revising its criteria for food orders. Helimo also supports making planetary diet visible in the meal options. In the diet, meat is not prohibited but the emphasis is on plant-based foods. According to Helimo, having meat-based meals available on request, as the vegan ones currently are, would be justifiable in terms of health and environmental impact.

As the sustainability and responsibility specialist, Helimo has an important role in directing JYU towards carbon neutrality by 2030 and is involved in creating sustainability criteria for the university’s food purchases. It has been agreed with Helimo that Jytte can participate in the process next year.

The representatives of Semma were happy for Jytte to relay them any food-related requests as well as experiences of the cafeterias and the meals they serve. We also discussed the idea of Jytte commenting on Semma’s future communication plans from a customer’s perspective.

Next year, Jytte will continue to have opportunities to make the campus more climate and environment friendly. The Climate and Environment Working Group will continue its work and if you are interested in participating, please join us! You can do as much or as little as you want. Membership does not include any obligations. Welcome! 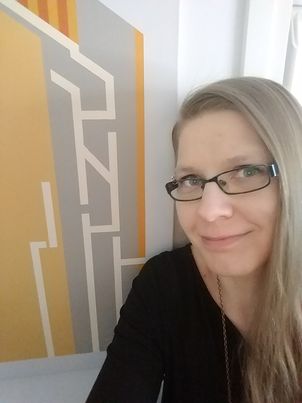